Until the 17th century, Italy was the world leader in fashion.  Then, for several centuries, they lost that title to other European nations.  However, in 1951 they made a comeback when the first multi-designer Italian fashion show was held in Florence. “The fashion press responded with enthusiasm, using phrases like “seductive elegance” and “aristocratic ease.”  “Throughout the 1950s, competing fashion shows in Florence and Rome solidified Italy’s reputation for Capri pants, “palazzo pyjamas,” and other youthful, elegant sportswear.” [1]

Not only did the Italians lead the world in “elegant sportswear” but they were also producing evening wear and every day designs – influencing what would become the iconic 1950’s look.  One popular style was the I-line where “a fitted bodice was paired with a pencil-slim skirt. The outfit hugged the body from the shoulders to several inches below the knee. . . The addition of a wide-brimmed hat, long gloves . . . and the new stiletto-heeled shoes made the style all the more elegant”.  “During the 195

0’s and 1960’s, women’s fashions were transformed from sharp, geometric shapes in artificial fabrics to free-flowing lines in natural fibers”.

The style in these shows were continuing many fashion trends that were developing in the late 1940’s-early 1950’s as people throughout the world recovered from World War II. One of the most influential fashion changes was the “New Look.” In fashion, “The “New Look” consisted of a below-mid-calf length, full-skirt, pointed bust, small waist, and rounded shoulder line… At first, the style was not well received by Americans; however, that quickly changed as the trend dominated fashion magazines.” 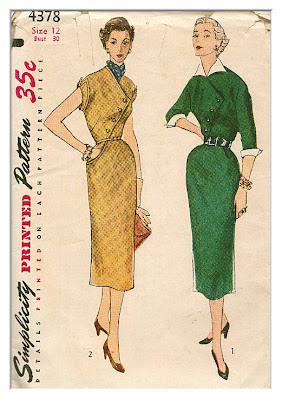 Other styles that became popular during the post-war period were “a tailored, feminine look with gloves and pearls, tailored suits with fitted jackets with peplums, with a pencil skirt.  Day dresses had fitted bodices and full skirts, with jewel or low-cut necklines or Peter Pan collars.  Shirt-dresses and halter-top sundresses were also popular.  Skirts were narrow or very full, held out with petticoats, while poodle skirts were a brief fad.”[2]

In The Light in the Piazza you will see the results of the fashion changes that occurred in both Italy and the United States post WWII.  We are excited to work as a team to find and create costumes for our actor’s that will share the Italian and United States fashions that would have been worn in 1953.  We are working to capture and bring to life the essence of 1953 as two American tourists are swept away on an adventure through Italy!