The world of L’Engle’s characters is filled with fictional place names, often taken from mythological figures that relate symbolically to locales in the book. For example, the planet Ixchel in A Wrinkle in Time, where Meg is cared for by a motherly creature, who’s name is Ixchel, a Mayan moon goddess. Other, more mundane locations are often fictionalized versions of places L’Engle has lived or visited in the real world, such as L’Engle’s Connecticut home, which strongly resembles that of the Murry family.

Overall, the series takes place in a roughly contemporary setting, usually understood to be in the near future with respect to the publication dates of the first two novels. Since the series was written over the course of decades, it is not possible to establish an exact year in which each story takes place; historical events mentioned in the books (such as the dates of the Apollo space program and the name of the President of the United States) do not always correspond to the “real world.” In recognition of this, and of the cosmic nature of the series, the inside front cover of Many Waters states that the series is set in Kairos, a way of looking at time as “real time, pure numbers with no measurement,” reflecting her belief that “God’s time and our time are not the same.”

Each of the books contains one or more instances of time travel, carrying the protagonists to metaphysical battlegrounds in the cosmic struggle between good and evil. The eponymous “wrinkle in time” is a short hop to the immediate past, engineered by the Mrs W’s to allow Meg, Calvin and Charles Wallace to accomplish their mission and return before they are missed at home. In A Wind in the Door, Proginoskes takes Meg to “yesterday” to show her the Echthroi destroying a patch of stars. Charles Wallace spends most of A Swiftly Tilting Planet “within” the bodies and minds of people from the distant (and not-so-distant) past, traveling there by unicorn. Many Waters finds Sandy and Dennys stranded in the time of Noah after unwisely typing on their parents’ computer while an experiment is in progress. 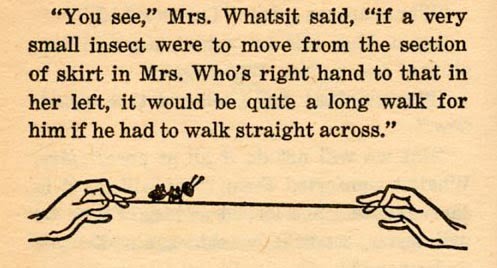 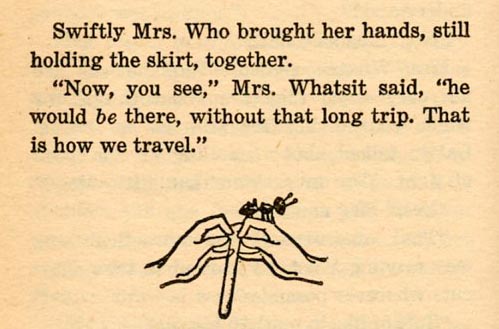 As L’Engle explains in her book The Rock That is Higher: Story as Truth: “If we limit ourselves to the possible and provable… we render ourselves incapable of change and growth, and that is something that should never end. If we limit ourselves to the age that we are, and forget all the ages that we have been, we diminish our truth.” Later in the same book, she further explains her use of the science fantasy genre: “Writing A Wrinkle in Time... was my first effort in a genre now called ‘science fantasy’, and science fantasy is not far from fairy tale, that world which delves deep into the human psyche, struggling to find out at least a little more of what we are all about.”