The process in bringing The Light in the Piazza to life continues to be an incredible journey.  In order to recreate the idea of  the 1950’s a lot of time has been and continues to be spent on the design elements of the show. 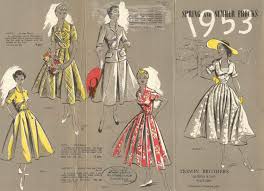 Our costumes are a crucial part of not only helping the actor’s to feel like they are in a different decade but also establish a consistent world or our production.

“The design process thus far for The Light in the Piazza has been a great experience. This is such a beautiful story, and the music is so gorgeous, I was excited to work on it from the start. It has also been such a joy to work with such a talented director and this team of talented designers.

For this production, our director wanted the costumes to be really stylish, classy 1950’s. These are all fairly wealthy, stylish people and therefore need to look really sharp.  He also wanted me to take inspiration from old technicolor films. I have decided to achieve this with a lack of patterned clothing. Everything is pretty solid and clean which, along with the use of brighter colors, should add to the technicolor feel of the show.  I also took a lot of inspiration from the short story that the musical is based on. I love the description it has of the way Clara changes the longer she spends time in Italy, with the Nacarellis’. I wanted her costumes to reflect this change. Color is very important in this production. We wanted there to be a visual difference between the Italians and the Americans in both the cut and color of their clothing. Not only are the colors of the costumes a way to differentiate the Americans from the Italians at the beginning of the show, but it will be used to illustrate the changes that these characters have.

We just started fittings with the cast, and so far, these have gone really well. It is always a little scary because if things don’t fit,you have to go back to the drawing board. But for the most part, everything has worked out great. Other than that we are in the midst of building some dresses for the production, which has been such a fun experience!”